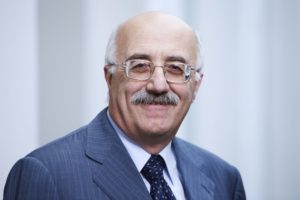 The Camille and Henry Dreyfus Foundation has announced that Michele Parrinello, Professor at USI Università della Svizzera italiana and ETH Zurich, has won the 2017 Dreyfus Prize in the Chemical Sciences, conferred this year in Theoretical and Computational Chemistry. The international prize, awarded biennially, consists of $250,000, a medal, and a citation. The award ceremony will be held at USI Università della Svizzera italiana in Lugano, Switzerland, on September 20 and will include a lecture by Parrinello.

Parrinello is honored for his groundbreaking developments of molecular dynamics simulation methodology and associated landmark studies of chemical, material, and biomolecular systems.

“Innovations in theoretical and computational chemistry underpin our understanding of biological interactions, chemical dynamics and structure, as well as many beneficial chemical technologies. Michele Parrinello is a giant in the field, whose innovations are widely used in chemistry, biology, materials science, and engineering,” stated Matthew Tirrell, Chair of the Dreyfus Foundation Scientific Affairs Committee and Founding Pritzker Director of the Institute for Molecular Engineering at the University of Chicago.

The impact of Parrinello’s work is such that he is one of the most cited scientists in the present day. He is renowned for co-devising the Car–Parrinello method for computer simulation of the movements of atoms and molecules. This work brought together, for the first time, the classical approach of molecular dynamics with a quantum theoretical approach for electron densities. This enabled the realistic exploration of a wide range of physical situations. Prior to this Parrinello had become distinguished for developing the Parrinello–Rahman method to study phase transitions in crystals.

More recently, he has developed what is called metadynamics and subsequently announced an efficient variational sampling process. This has allowed the calculation of complicated phenomena such as protein folding, crystallization from a liquid, or the binding of drugs to protein receptors.

“I am overjoyed and humbled by the honor,” said Parrinello. “I would like to dedicate this prize to my mentor Anees Rahman, the founder of modern atomistic molecular dynamics, a superb scientist, and a great human being. It was my good fortune to have met him as well as the very many talented colleagues and students with whom I had the pleasure to collaborate.”

Born in Messina, Italy, Parrinello received his Italian Laurea in physics from the University of Bologna in 1968. He has received many international honors including the Dirac Medal, the Rahman Prize, the Hewlett-Packard Europhysics Prize (all with Roberto Car), the Schrodinger Medal, the Enrico Fermi Prize, the Swiss Science Prize Marcel Benoist, and the American Chemical Society Award in Theoretical Chemistry. He is a Fellow of the American Physical Society, Socio corrispondente of the Accademia Nazionale dei Lincei (Italy), and a Member of the Royal Society (UK), the European Academy of Sciences, the National Academy of Sciences, the American Academy of Arts and Sciences, and others.

The Dreyfus Prize in the Chemical Sciences, initiated in 2009, is conferred in a specific area of chemistry in each cycle. The previous Dreyfus Prize winners are: