George M. Whitesides, the Woodford L. and Ann A. Flowers University Professor of Chemistry at Harvard University, has won the inaugural Dreyfus Prize in the Chemical Sciences. The prize, given biennially by the Camille and Henry Dreyfus Foundation, recognizes exceptional and original research in a selected area of chemistry that has advanced the field in major ways. Conferred in materials chemistry in 2009, the prize consists of a monetary award of $250,000, a citation, and a medal. The award ceremony was held at Harvard University on September 30, 2009, and included a lecture by George Whitesides (pictured here with Henry C. Walter, Dreyfus Foundation President).

Whitesides has had a major and sustained impact in the chemical sciences and materials chemistry. He is one of the most innovative and prolific chemists of our time and the most highly cited living chemist in the world. He has developed powerful methods for the creation of new materials that have significantly advanced the field of chemistry and its societal benefits. His research extends across multiple disciplines, centered on chemistry, but touching biochemistry, drug design, and materials science. His work extends to the engineering of functional systems and the applications of these systems in areas ranging from biology to microelectronics. He has opened broad new technological avenues and has impacted human health in significant ways. Whitesides’s research in materials chemistry has become an essential part of materials synthesis programs around the world.

“I’m particularly pleased and honored to receive this award from the Dreyfus Foundation. Its work in raising public awareness of chemistry is helping to educate young people about the transformative power of this science,” said George Whitesides. “Chemistry has the opportunity of a century to do something profound for society. The whole area of materials chemistry, including challenges in energy, water, conservation, sustainability—commodity infrastructure— is up to us, as chemists, to work through.”

Among Whitesides’s many innovations are the synthesis and molecular organization of new classes of materials, pioneering self-assembled monolayers and microfluidic systems to enable the development of new drugs and extend soft materials into the world of three-dimensional microelectronics, and into consumer devices such as solar cells. Within this work he developed soft lithography, a set of methods for printing and molding organic-based substances to make complex patterns at the micron and nanometer level.

Whitesides combined these approaches for creating materials with the concept of polyvalency and developed a new paradigm for drug design. This has resulted in affordable medical diagnostics expected to have a major impact on health in the third world as well as new drugs that manage cholesterol, improve dialysis, and combat multiple drug-resistant pathogens.

Henry C. Walter, President of the Dreyfus Foundation, said, “I believe the Dreyfus brothers—materials chemists, inventors, and businessmen—would be very proud to honor George Whitesides, a chemist who has generated so much value to society based on his innovative chemistry research. It reflects the Dreyfus Foundation charter admirably.”

Marye Anne Fox, Chancellor of the University of California, San Diego, and Chair of the Dreyfus Scientific Affairs Committee, noted, “George has revolutionized materials chemistry. He has developed a unique interdisciplinary approach to materials systems that is of widespread influence in chemistry research.”

George Whitesides has received many awards. Among those from the American Chemical Society are the Award in Pure Chemistry, the Arthur C. Cope Award, and the Society’s highest award, the Priestley Medal. From other institutions his awards include the Materials Research Society’s Von Hippel Award, the Welch Award from the Welch Foundation, the American Institute of Chemists Gold Medal, and the Franklin Foundation’s Benjamin Franklin Medal in Chemistry. In 1998, he was awarded the National Medal of Science. International recognition includes the Kyoto Prize for Advanced Technology, the Paracelsus Prize of the Swiss Chemical Society, the UAA-Dhirumbhai Ambani Award of the National Academy of Science in India, and the Prince of Asturias Foundation’s Award in Science and Technology.

In addition to his academic research, he has helped found 12 companies in biotechnology and materials science and holds more than 50 patents. He is a member of the board of directors of Theravance, Hughes Research Laboratories, Surface Logix, Nano-Terra, Arsenal Biomedical, Diagnostics for All, and Paper Diagnostics. 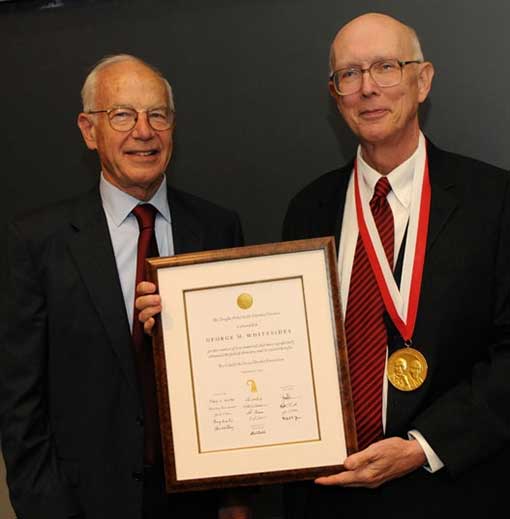