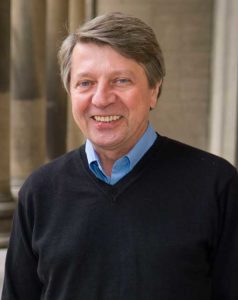 Krzysztof Matyjaszewski, the J. C. Warner University Professor of Natural Sciences at Carnegie Mellon University, was awarded the 2015 Dreyfus Prize in the Chemical Sciences, conferred in Making Molecules and Materials. The international prize, awarded biennially, consists of $250,000, a medal, and a citation. The award ceremony was held at Carnegie Mellon University on October 1 and included a lecture by Matyjaszewski.

Matyjaszewski developed the process of atom transfer radical polymerization (ATRP), which has proven to be the most important advance in polymer synthesis in half a century. Based on ATRP, he has developed processes for efficiently synthesizing complex structured polymers and co-polymers, as well as many other important new materials. In addition to developing applications of ATRP, he has led this new field in understanding mechanisms and developing new catalysts. For example, his development of new copper complexes, over one million times more active than the original, have allowed catalysts to be reduced to parts per million levels, and has made the ATRP process sufficiently environmentally friendly that Matyjaszewski was awarded the 2009 Presidential Green Chemistry Challenge Award.

In addition to these major advances in polymer chemistry, Matyjaszewski has also been effective at transferring the ATRP process to industry, with applications that include automotive coatings, adhesives, cosmetics, inkjet printing, smart and electronic materials, and many others, with an estimated commercial value exceeding $20 billion. “Kris Matyjaszewski’s work has made free radical polymerization a precision tool for polymer scientists to make controlled macromolecular structures, and has opened new avenues for industry in the control of polymer architecture in practical manufacturing processes,” stated Matthew Tirrell, Dean and Founding Pritzker Director of the Institute for Molecular Engineering at the University of Chicago and Board Member of the Dreyfus Foundation.

Henry C. Walter, President of the Dreyfus Foundation, said, “Krzysztof Matyjaszewski’s work in polymer chemistry follows in the tradition of Camille and Henry Dreyfus, who were major innovators in their day in making polymer materials. We are proud to recognize his immense accomplishments with the Dreyfus Prize.”

“I feel very honored and flattered to receive the Dreyfus Prize for making molecules and materials. This recognition addresses not only contributions of my students and collaborators but also all polymer chemists working in the area of controlled/living polymerization focused on the precise synthesis of small molecules and macromolecular materials with controlled architecture and functionality for targeted applications,” said Matyjaszewski.

Born in Poland, Matyjaszewski received his doctorate from the Polish Academy of Sciences in 1976. He completed a postdoctoral fellowship at the University of Florida and worked as a research associate at the Polish Academy from 1978 to 1984. He came to Carnegie Mellon in 1985 and was appointed the J. C. Warner Professor of the Natural Sciences in 1998. He was named University Professor in 2004. Matyjaszewski also directs the Center for Macromolecular Engineering.

Matyjaszewski has received many honors including election to the US National Academy of Engineering, Fellow of the American Chemical Society, the Wolf Prize, the Marie Sklodowska-Curie Medal of the Polish Chemical Society, several ACS awards related to both Polymer Science and Engineering, the inaugural AkzoNobel North America Science award, Japanese Polymer Science and Materials Science awards, as well as other national and international honors.