The Camille and Henry Dreyfus Foundation awarded R. Graham Cooks, the Henry Bohn Hass Distinguished Professor of Chemistry at Purdue University, the 2013 Dreyfus Prize in the Chemical Sciences, conferred in Chemical Instrumentation. The international prize, awarded biennially, consists of $250,000, a citation, and a medal. The award ceremony was held at Purdue University on September 24, 2013, and featured a lecture by Professor Cooks (pictured above with Henry C. Walter, Dreyfus Foundation President). 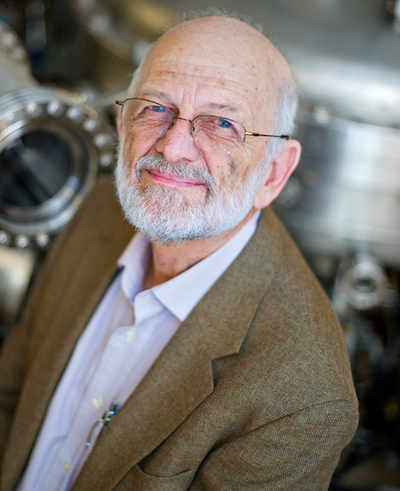 Graham Cooks is recognized internationally as an innovative giant in the field of mass spectrometry who has enriched analytical chemistry in unparalleled ways. Virtually every pharmaceutical and biotechnology company relies on mass spectrometry at a level that has become possible, in part, through Cooks’s innovations.

Mass spectrometry is the science of accurately determining the masses of molecules in a sample from which we can learn the elemental composition of each constituent molecule. Cooks advanced this analytical capability with the introduction of tandem mass spectrometry in which selected ions generated from complex mixtures are further fragmented and the masses of the fragment ions determined. By putting together these pieces of a jigsaw puzzle, a picture emerges of the molecular structure of the parent ion. Cooks has also made groundbreaking advances in ambient desorption/ionization in which ions from a sample at room-temperature in air are introduced into the mass spectrometer for analysis, removing many of the difficulties associated with sample preparation and volatilization in previous, complex mass spectrometric techniques.

In a remarkable accomplishment, Cooks and colleagues have recently created miniature mass spectrometers, enabling the remote deployment of these analytical instruments including under battery power. Mass spectrometers, once roughly as large as an automobile, are now reduced to the size of a shoebox, allowing their widespread use in clinics, homeland security, the military, and food safety. Cooks noted, “We are trying to take powerful and sophisticated instruments out of the lab and into the real environment where, for example, they could monitor fresh produce all along the supply chain, from production to the consumers. This technology has the capability of testing for bacteria in only a matter of minutes as opposed to hours or even days for standard laboratory tests.”

Cooks described the Dreyfus Prize as a major career highlight. “I am particularly pleased that the Dreyfus Foundation chose chemical instrumentation as the topic of the prize,” Cooks stated, “because it is an emphatic recognition of the importance of instrumentation in the chemical sciences.”

Henry C. Walter, President of the Dreyfus Foundation, said, “Chemical instrumentation has shaped human life in a myriad of positive ways. Graham Cooks is a consummate innovator and it is a great pleasure to recognize him with the third Dreyfus Prize.”

Richard N. Zare, the Marguerite Blake Wilbur Professor in Natural Science at Stanford University and a Board member of the Dreyfus Foundation, remarked, “Mass spectrometry has had an extraordinary impact on modern science, and Graham Cooks has changed the field in many important ways. He has developed critical new experimental instruments and methods and applied them to solve significant problems.”

R. Graham Cooks received B.Sc. and Ph.D. degrees from the University of Natal, South Africa, and a second Ph.D. from Cambridge University. He has been at Purdue University since 1971. He is the recipient of many honors. These include the American Chemical Society awards in Chemical Instrumentation, Mass Spectrometry, Analytical Chemistry, and the F.A Cotton Award. He has been recognized internationally with both the Robert Boyle Medal and the Centennial Prize of the Royal Society of Chemistry.