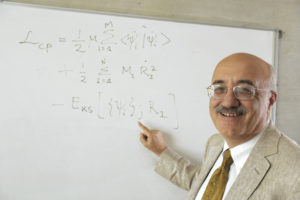 Meet Michele Parrinello, Professor of Computational Sciences at the Università della Svizzera italiana and ETH Zurich, and winner of the 2017 Dreyfus Prize in the Chemical Sciences. The 72-year old, soft-spoken Sicilian-born professor is unsurpassed in his contributions to the field of computational chemistry, continuously improving methodologies for simulating the behavior of atoms and molecules. His research has paved the way for a better understanding of biological and chemical reactions, critical to the development of new materials, renewable energy sources and drug therapies, and to a better understanding of the natural world.

The Car-Parrinello method, published in 1985, vaulted the field of computational chemistry by innovatively combining molecular dynamics (the simulation of how atoms and molecules move) with a quantum theoretical approach to electron structure. Together with fellow researcher Roberto Car, Parrinello developed first principles equations for modeling chemical reactions and structural phase transitions that occur when interatomic bonds break down and new bonds form. Car-Parrinello Molecular Dynamics (CPMD) played a significant role in establishing computational chemistry as the third pillar of modern chemistry, alongside theory and experimentation, giving scientists a “virtual microscope” into phenomena that cannot be explored empirically. Today, scientists and engineers from fields as diverse as chemistry, biology, entomology, physics, and materials science use codes derived from CPMD’s approach.

Currently, Parrinello is further advancing his computational methodologies with metadynamics and variational sampling research. His work is progressing the ability to simulate—in practical timeframes—more complex phenomena and rare events, such as protein folding and protein-ligand binding, which has significant applications in drug design. For more on Parrinello, see this video.

What interested you in pursuing a career in science?
I was actually drawn to science through my interest in mathematics. In my high school in Messina, Italy, we didn’t do much in mathematics, but I liked it. It came easy to me. Before university, my studies were more oriented to the Classics—eight years of Latin and five years of ancient Greek.

Was anyone in your family a scientist?
No, my father was a pediatrician and my mother was a high school literature and history teacher. Both came from very modest backgrounds. My mother came from a very small village in Sicily. She was the first of her family to go to university, which was truly remarkable.

Why did you pursue theoretical and computational science?
I was educated as a physicist in Bologna, Italy, but little by little I became interested in chemical problems—the formation and breaking of chemical bonds in condensed matter and phase transitions.

What have been your primary goals with your research?
I am interested in finding new ways of solving problems, without prejudice or fear of moving in a new direction. To paraphrase the Spanish poet Antonio Machado, where there’s no path, you make your own path. I’m looking to understand the complexity of a system and to explain it on an anthropomorphic level we can understand. I want to find ways to use our simulations, our ‘virtual microscopes,’ that not only allow us to ‘zoom in’ on the molecular level but to also ‘zoom out’ to the interrelationships of molecules within larger chemical and biochemical systems.

You’ve dedicated the Dreyfus Prize to Aneesur Rahman, the father of molecular dynamics. Why?
After studying condensed matter theory as a physicist in Trieste, Italy, I was invited to spend three months in 1981 at the Argonne National Laboratory in Chicago. Meeting Aneesur there was one of the greatest blessings of my life. He patiently taught me everything he knew about molecular dynamics while we were working side-by-side in the computation lab, with our punch cards—not only about simulations but how to convert the results into new physical insights. This is where we developed the Parrinello-Rahman method. By changing the classical equations of the motion of atoms and molecules, we were able to simulate a crystal structural phase transformation and see, on a molecular level, what is happening when a solid changes to a liquid. It was a magic moment. Aneesur looked at me and said, “You are a lucky man,” since we had observed for the first time on the computer a crystal structure transformation, using what is now called the Parrinello-Rahman method.

The Car-Parrinello method is the work you’re most known for—cited more than 10,000 times. Why was this so groundbreaking?
Car-Parrinello brought two very separate disciplines together: my work in molecular dynamics and statistical mechanics with Roberto Car’s work in Density Functional Theory (the study of the electronic structure of atoms and molecules in condensed matter). Coming together forced us out of our comfort zone. At that time, in theoretical computations, the atoms in electronic structure calculations were static; they didn’t move the way they do in the real world. We knew there was more to life than that, so we set out to find the right combination of codes that would allow the atoms to move in response to first principle forces, thereby resulting in more accurate, reliable and predictive calculations. Overnight, the invitations to give talks started flooding in.

You were only 39 years old when you and Roberto Car developed Car-Parrinello?
Yes, we were working together when I went back to Trieste, in the winter of ’84-’85. We had the fire of youth back then. We didn’t think about the difficulties. We worked day and night for about four months.

How has the Car-Parrinello method had a lasting effect on the field of computational chemistry?
Almost all, if not all, of the codes used for simulating condensed matter are heavily based on ideas from Car-Parrinello. CPMD is very powerful, but it has its limitations. One of them is the impractical short timescales required to accurately simulate systems with large numbers of atoms and changing configurations. The area I’m working in now, metadynamics, grew out of my realization of CPMD’s limitations. Metadynamics uses enhanced sampling methods to calculate the rate of conformational changes to explore phenomena such as complex chemical reactions, phase transitions, and protein folding.

What areas are you currently studying with metadynamics?
My group in Lugano is working on four areas: method development, in which we are advancing sampling and coarse-graining techniques; materials science; chemistry in solutions; and protein interactions. Using metadynamics, we are looking at how you make new materials by controlling the shape of the crystal being formed. In chemistry in solutions, we are studying water in particular. We are looking at protein reactions, which is in some ways the Holy Grail. Some proteins are like chemical machines that are used by viruses. If we can stop the functioning of these proteins, we can cure the disease.

Why should the public be interested in computational chemistry?
Solutions to our societal problems, such as those facing our health, safety, energy and the environment, will depend on science. Our quality of life depends on advances being made in the chemical fields, from designing new drugs and new materials to finding new energy sources. In each of these areas and more, progress would be slowed down or even hampered without the guidance and insight that is provided by both theory and computer simulation.

Can you give specific examples of how your research could have an impact on environmental safety?
Reliably simulating chemical reactions in molecules can help engineers develop new biodegradable or solvent-free materials that are less harmful to the environment and new ways of producing energy. Understanding what happens in the formation and breaking down of bonds has applications, for example, in carbon sequestration and in our ability to clean up chemical spills.

What is the significance to you of the Dreyfus Prize?
It gives me reassurance that what I have done has not gone unnoticed and that people out there value my efforts. When I was starting out, I never would have guessed I’d get such acclaim with my ideas.