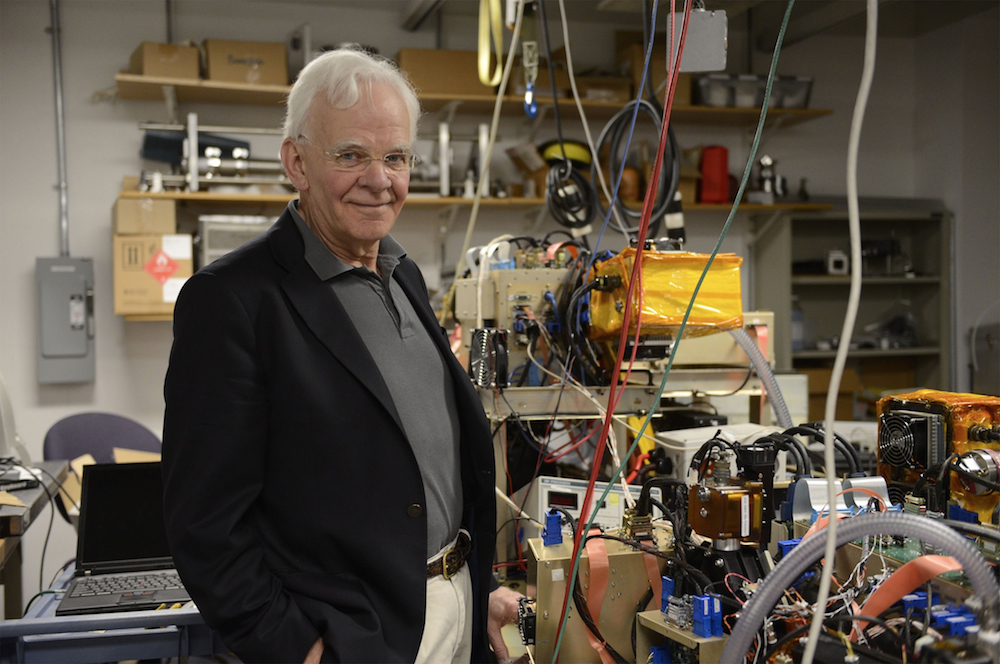 © 2021 The Harvard Crimson, Inc. All rights reserved. Reprinted with permission.

James G. Anderson, the Philip S. Weld Professor in Chemistry at Harvard University, is the recipient of the 2021 Dreyfus Prize in the Chemical Sciences. The international biennial Prize, which includes a $250,000 award, is conferred this year in Environmental Chemistry. The award ceremony is scheduled to be held at Harvard in the fall.

Anderson received this award for decades of landmark contributions to the field of environmental chemistry. He is honored for pioneering measurements of the free radicals that drive the chemistry of the atmosphere, establishing the foundation for worldwide agreements to protect the stratospheric ozone layer. His work and advocacy have had an enduring impact on scientists, policy-makers, students, and society. He is a towering figure in the field, renowned for his extraordinary abilities to both distill the most important questions that characterize the complex photochemical system of the stratosphere and then to perform the extremely challenging experiments required to address them. He has testified on numerous occasions before both Senate and House committees on national energy and climate issues.

Anderson’s high-altitude measurements of the reaction kinetics of chlorine radicals derived from chlorofluorocarbons, also known as CFCs, directly shaped the Montreal Protocol, a milestone global agreement to protect the stratospheric ozone layer. His work demonstrated conclusively that CFCs were responsible for the massive destruction of stratospheric ozone. As a direct result of Anderson’s research and testimony, CFC emissions harmful to the atmosphere were phased out. The Montreal Protocol, finalized in 1987, was the first treaty to be ratified by all countries in the world.

Anderson’s results are widely considered to be the gold standard for reaction rate data and in situ observations of free radicals, reactive intermediates, and isotopes in the stratosphere. The reactions that he identified in the atmosphere were then studied rigorously in his laboratory by developing ultrasensitive laser and detection techniques. The laser-based systems he developed, to measure concentrations as low as 1 part in 1014, provided the ability to quantitatively establish the rate of catalytic loss of ozone that allowed the direct testing of models of stratospheric chemistry.

Recently, Anderson made a revolutionary link between the decrease of stratospheric ozone and global climate change. The increase in violent thunderstorms, particularly in the Midwestern United States, transports water vapor into the relatively dry stratosphere. Anderson’s work has shown that the radicals that originate from this increased water concentration contribute substantially to a loss of this protective layer of ozone.

Anderson’s influence is further amplified by his transformative work as an educator. Many of his students and postdoctoral fellows have become distinguished faculty at top-ranked universities. Anderson’s latest book, University Chemistry: Frontiers and Foundations from a Global and Molecular Perspective (MIT Press), provides a blueprint to teach introductory chemistry concepts within the larger context of technology, global energy, and climate. His novel approach motivates students by using real-world problems that can be solved by chemistry, and is the foundation of a widely popular course at Harvard.

“Jim Anderson has created the tools and the instrumentation to understand the mechanistic links among the chemistry, radiation, and dynamics in the atmosphere that control climate,” stated Matthew Tirrell, Chair of the Dreyfus Foundation Scientific Affairs Committee and Dean of the Pritzker School of Molecular Engineering at The University of Chicago.

Anderson was elected to the National Academy of Sciences in 1992. He is a Fellow of the American Philosophical Society, the American Academy of Arts and Sciences, the American Association for the Advancement of Science, and the American Geophysical Union. His many awards and honors include the Lichtenberg Medal from the Göttingen Academy of Sciences and Humanities, the Polanyi Medal of the British Royal Academy of Chemistry, the Benton Medal for Public Service by The University of Chicago, and the Smithsonian American Ingenuity Award in the Physical Sciences. He received the Harvard University’s Ledlie Prize for Most Valuable Contribution to Science by a Member of the Faculty; the United Nations Vienna Convention Award for Protection of the Ozone Layer; the E.O. Lawrence Award in Environmental Science and Technology; and two American Chemical Society awards: for Chemistry in the Public Interest and for Creative Advances in Environmental Science and Technology.

H. Scott Walter, President of the Dreyfus Foundation, remarked, “Jim Anderson’s contributions to our understanding of environmental chemistry are extraordinary and profound. We have all benefited from his work. The Foundation is thrilled to recognize his accomplishments with the Dreyfus Prize.”

Anderson stated, “Increasingly, private scientific foundations are driving innovation within rapidly developing, multidisciplinary, scientific initiatives of critical importance to both expanded educational opportunities and unprecedented research opportunities. For seventy-five years the Dreyfus Foundation has pioneered innovation in chemistry and chemical engineering in the context of coupling research and education to societal responsibility, and to solve global scale issues that sustain the human endeavor. Thus, I am deeply moved by receiving the Dreyfus Prize in the Chemical Sciences.”

The Dreyfus Prize in the Chemical Sciences, initiated in 2009, is conferred in a specific area of chemistry in each cycle. It is the highest honor of the Camille and Henry Dreyfus Foundation. The previous Dreyfus Prize winners are: